Adjusting to life as a non drinker

To what extent should you change other parts of your life when you stop drinking? I was thinking about this in a club late last night, as I pretended to be having a great time, dancing away with the rest of the hen party I was with. The evening had been pretty hard work. There’d been drinks in a bar, a meal and then dancing. I only knew about half the group so there was a lot of small talk to start with. Quickly, everyone else bonded over wine and rounds of shots. Booze is great at making strangers the best of friends. Without alcohol, I did not feel that fake intimacy. There was nothing to numb the pain from my high heels. I wasn’t interested in any of the sweaty men in the club. I wasn’t really in the mood to dance. I felt very, very tired. Oh god, I thought. Have I become boring?

I think some people would say I shouldn’t have gone last night. It was always going to be an evening that revolved around alcohol. But I knew I’d be able to handle it and I did. If I’d been having a bad day, or was unsure of my ability to turn down a drink I wouldn’t have gone. Early on I decided to tell a few people about the 100 day challenge and they said very little about it. The only person who really didn’t get it was the bride-to-be, who got so drunk she kept forgetting what I’d told her. We had the “come on, just have one…” conversation about three times.

I’d been determined to go last night. To be honest, I think I was on some mission to try and prove that being sober doesn’t have to stop me living a normal life and joining in with my friends. I am still a fun person who can party with the best of them. I am. Aren’t I?

The problem is, the new me just doesn’t seem to like clubbing anymore. I loathe any event that’s just an excuse to drink. Which is a bit of a problem seen as drinking is our national pastime. Some of my oldest, closest friends are big drinkers. It’s their hobby, just as it was mine.

Over the past few weeks I’ve found it very hard to predict how a night out is going to go. Sometimes, I can meet friends in the pub or go to a house party and have a brilliant time. Slightly drunk friends can be funny and great company and often they don’t notice that I’m not drinking. But other times they really, really aren’t nice to be around. They can boring and repetitive and I sit there feeling excluded and resentful.

What is the solution to this? I’m not sure. Do I get a bunch of new, sober friends and ditch all the old ones? Unlikely. Maybe I just need to get better at working out what makes a good night and what makes a bad one.

21 thoughts on “Adjusting to life as a non drinker” 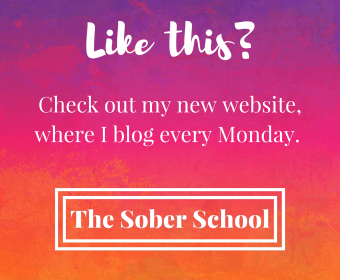 Hi, I'm Kate. This blog is all about my first 18 months of sobriety. I'm still sober and doing great but I no longer post here. If you want to see what I'm up to now, please check out my new website, thesoberschool.com
%d bloggers like this: